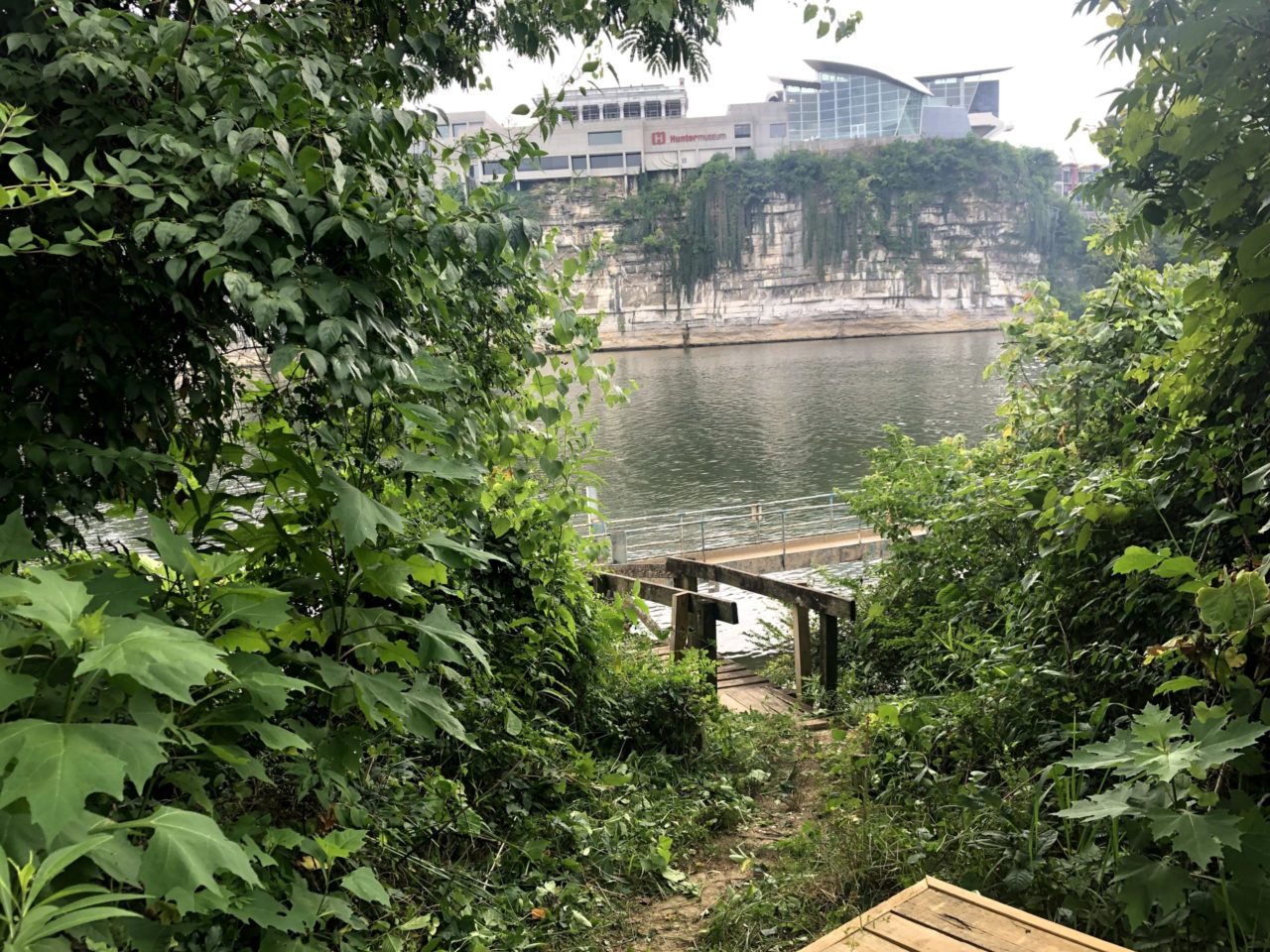 Have you ever wondered about that island in the middle of the Tennessee River only a stone’s throw from downtown Chattanooga? Maybe you were enjoying a romantic stroll over the Walnut Street bridge when that forested island caught your eye. I know I have spent quite a few sunny afternoons lounging on the riverbank at Coolidge Park watching herons hunt from their island home. I had always wanted to go but never had a boat and didn’t fancy a swim. To me, the island remained a mysterio

us piece of wilderness in the heart of Chattanooga. That was until Randy Whorton enlisted me to help with some island renovations.

I left class on a gusty Tuesday afternoon, Maclellan Island-bound. However, my Tacoma would only get me so far. The island is only accessible by water, or possibly a BASE jump from Veterans Bridge with a tricky landing. (Wild Trails in no way condones this method of access no matter how cool it would be.) To be able to haul the necessary construction materials to the island, Randy elected to use his favorite form of transportation: SUP. You would be surprised at the sheer amount of lumber and tools you can strap onto a stand up paddle-board.

Personally, I had never SUP’ed before, but I was excited to and give it a go. Randy had already been working all morning with the stellar Wild Trails volunteer, Joe Minton. Thankfully, Joe had to get home early that day, meaning he could lend me his paddle-board. He met me on the north shore of the river and gave me a quick SUP 101 before I set off for the island. While it was technically spring, the air was cold, and the water colder. If I fell in, I would be shivering the rest of the day.

Randy waited at the island’s landing and watched as I clumsily teetered and tottered my way towards him. For a river, there were some substantial waves that I was unprepared for. Finally, after the suspenseful journey, I made it to the island shore mostly dry. We pulled my paddle board to shore and headed for the first campsite. From the spacious campgrounds, Randy led me down a little trail toward the project Randy and Joe had been working on. We spent the rest of the workday on the west end of Maclellan putting the finishing touches on the island’s latest and greatest composting toilet.

After our work was done Randy gave me a tour of the island. The history of the island surprised me. Maclellan Island was first home to Native Americans. Chattanooga’s very own archeology department at UTC has found various artifacts which date as far back as 500-900CE. In the 1800s, the island was known as Ross’s Landing and was used as a stepping stone to cross the river. Sadly, it was also a key location used in the Trail of Tears. Two detachments of Cherokee people were sent from their internment camps in downtown through Ross’s Landing via cable ferry.

Later, the island was occupied by farmers, but the constant threat of floods made the endeavor impractical. In 1876, a record-breaking flood completely submerged the island. One farmer, Mr. A. Kesterson, narrowly escaped a watery grave by clinging to the “horns of a heifer.\” In more recent history, the island was owned by Robert J. Maclellan who donated the island to the Chattanooga Audubon Society in 1954, and the Maclellan Foundation continues to fund conservation efforts on the island.

After Randy and I finished tacking on the siding, he showed me around the island via a nearly pristine 1-mile loop of trail. We passed the bunkhouse which Wild Trails recently renovated. Prior to the updates, nobody would want to go near that ancient building. But now it is the ideal venue for a scout’s trip. The first composting toilet Wild Trails built on the island is not far from the bunkhouse. Then, we made our way via trail to the Paddle Camp on the northeastern shore of the isla

nd. (Link to campsite reservation) I thought the first campsite was nice, but this one blew it out of the water. There is a great view of the river from the fire ring, and it was far enough for Veterans Bridge to feel a bit secluded. The beautiful views are complemented by a wide array of chirps and squawks. There are an inordinate number of interesting birds to found on the island: from little songbirds to geese, herons, osprey, and even cormorants.

I had never heard of a cormorant before, but after this trip, I will not soon forget them. Randy informed me that these birds visit Maclellan Island every spring to nest. They like to build their nests in the towering trees on the eastern edge of the island. You can watch them dive from their nest straight to the water. With their thin hooked beaks, they make for expert fishers. These birds are intelligent and highly social during the nesting season. They group their nests close together in neighboring trees, and boy, can these birds talk. The two of us tread lightly to get a closer look at them. They are a bit goofy-looking. Their name, cormorant, comes from Latin meaning “sea raven.” Their appearance and intelligence certainly fit the name.

Though we tried to approach quietly, two Canadian geese just off the shore sounded the alarm. Their honks blared across the island, ruining our attempts at silence. Luckily, the cormorants remained unperturbed, knowing they were safe in their treetop refuge. When the geese finally shut up, we could finally hear the odd language of these f

unny-looking waterfowl. They grunted, barked, and snorted, voicing noises that I would never expect to come from a beak. I could have stood in silence listening for hours. Just when I thought I had heard it all, the next coo would be totally unique.

If you haven’t heard the calls of a nesting cormorant, I suggest you hightail it to Maclellan Island while they’re still nesting. You might as well enjoy the newly renovated campsites and the convenience of a composting privy while you’re at it. We are also putting on the first Maclellan Cup, a virtual SUP/trail race. Participants will circumnavigate the island on paddle board and on foot. There will be prizes! Check out the link for more info. At Wild Trails, we are thankful to aid in the conservation of this unique piece of history and nature. We hope to see you out there.