In August of 2013 I was approached about building some new connector trails at Enterprise South Nature Park for the upcoming River Rocks Duathlon in mid-October. The idea was simple: Eliminate the 2-way traffic on the mountain bike trails to make them safer. This was going to be a team effort between Wild Trails and Chattanooga SORBA. Having built some of the current trails years ago I thought it was a quick and easy job. WRONG!!!

The scope of work was simple: a new Black Forest section from the end of the loop over to the ADA Road near TNT, a new connector from the bottom of TNT to Harrison Branch Road and finally, a new connector from Harrison Branch Road into Log Rhythm. That was two relatively short connectors and then one half-mile section on Black Forest. It was summer, there was plenty of sunshine allowing for weeknight work and I was pumped to get at it. 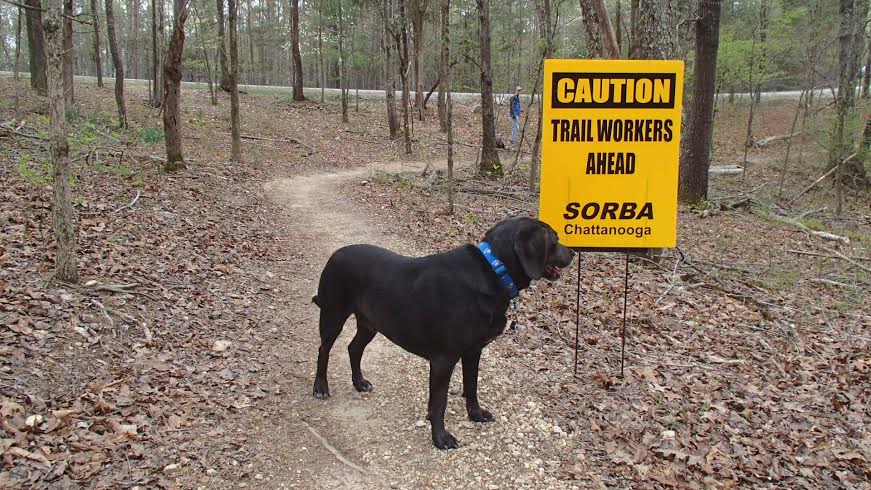 Trail construction is as follows: flag it, map it, get it approved, cut back brush and overhead stuff, cut the duff (first 2-3 inches), rake out dirt and debris from the duff, clear the rocks and roots, shape your slope for drainage, smooth, wait for a couple of good rains to firm it up, put up new signs and you have a new trail.

First, SORBA frontman Alan Johns flagged the routes and then we mapped them using the Wild Trails GPS with Randy Whorton putting them onto a map. The park superintendent readily approved the project and we were all set. I met my SORBA counterpart Zack Gaston with Scott’s Bikes and divided the workload. We decided to cut in the TNT to Log Rhythm sections first due to the upcoming race. This included the construction of a large bridge with handrails and 3 small ones by Jarret Kinder and Billy ‘Johnny Law’ Collins with Mr. Dewayne Sandidge assisting. We built the 4 bridges over the weekend and my thanks to Randy Whorton, Executive Director of Wild Trails, for the lumber. It is money well spent and will benefit trail users for years to come. 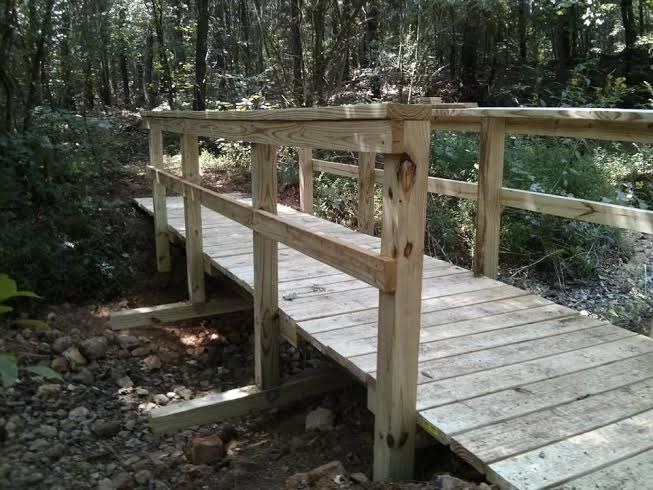 We finished the earthwork on the TNT side after a couple of Saturday workdays with numerous SORBA volunteers pitching in and then began work on the Log Rhythm side. When we opened those 2 sections just before race weekend confusion reigned as riders and runners attempted to understand the new flow. Again, thanks to Randy and Wild Trails for some new signs to keep everyone on track and to the SORBA guys and gals for redesigning the flow to keep it straight out there.

Meanwhile, I had been working on the new Black Forest on weeknights just hacking away foot by foot for a couple of months slowly realizing the enormity of the task. We caught a little break on the new Black Forest when I asked Mr. Kinder to bring his SK, a small tracked machine with a blade and bucket, out and rough cut the trail. He agreed and we had a good beginning, but a quickie cut isn’t a trail. I got some help from Billy, Nathan Holland and even Jeff Bartlett over the course of the project but progress was slow and winter was fast approaching I realized the enormity of the task.

With little daylight and a wet winter, the project ground to a snail’s pace in December. No evening daylight and the park closing at 5:30 meant only weekend work. Nevertheless, I kept at the task inexorably grinding and hacking my way forward to the fulfillment of my August promise to SORBA and Wild Trails. A self-made Gulag Archipelago or Bridge on the River Kwai! 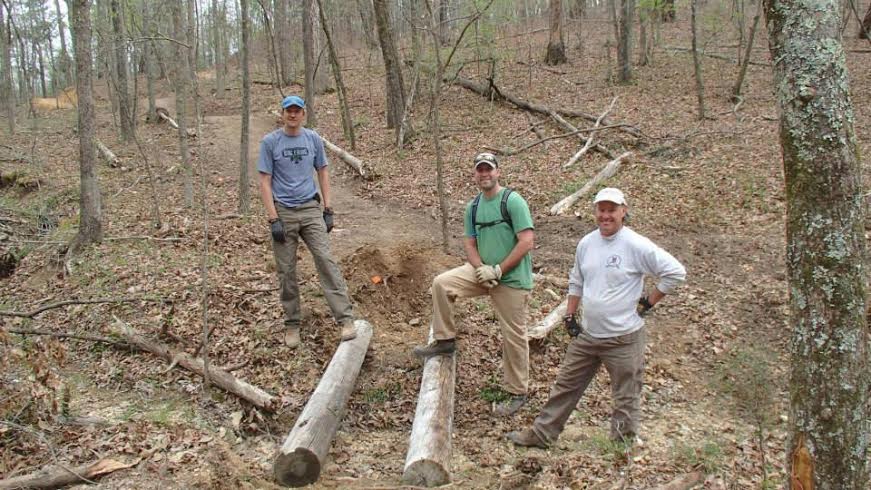 With the coming of spring progress picked back up and after numerous Saturdays and Sundays we could finally see the finish. We hit another snag when we had to armor sections of the new and old TNT connectors due to erosion. No sense is building a new trail when your old one is turning to crap! This meant that for consecutive Saturdays the crew would work on TNT, which winter had turned into a mud hole nearly destroying the trail. We realized the entire pine forest section at the bottom of TNT is erosion prone leaching water off the hillside and will require future repairs. Stay tuned next winter.

At some point we had the bright idea of adding a new connector from the gravel parking lot on Poe Run Road to Bunker 100. “Sure,” I said. “We can do that next!” So I decided to submit for a Wild Trails grant to rent equipment and buy some tools and bridging material for that job. No sense in running out of work. 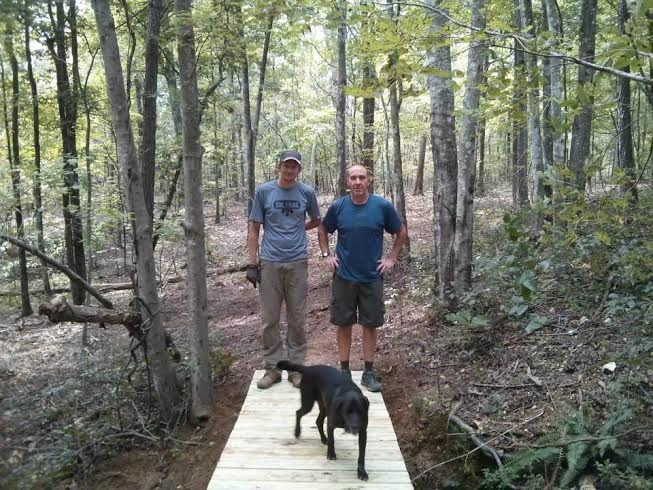 In April 2014 SORBA planned a bike race called Night Shift at ESNP which required elimination of 2-way traffic. Imagine a race, in the dark, with oncoming traffic. There was now a small sense of urgency to finish the new Black Forest section for the race and it was time to turn up the heat. We planned a serious workday with all the regulars including Mr. Kinder and his SK. With a little rake work, rock work and some new signs we cranked it out and the trail opened with rave reviews for Night Shift. We even got Dawson and R/C out to build a handrail on the bridge.

Our last project was the new connector from the gravel lot to Bunker 100. This included one last small bridge and an awesome bank turn in the pine forest above the parking lot. Thanks to Alan and Barry for that idea. We finished that a few weeks ago and the riders are pumped about the bank turn and I am pumped to be done. 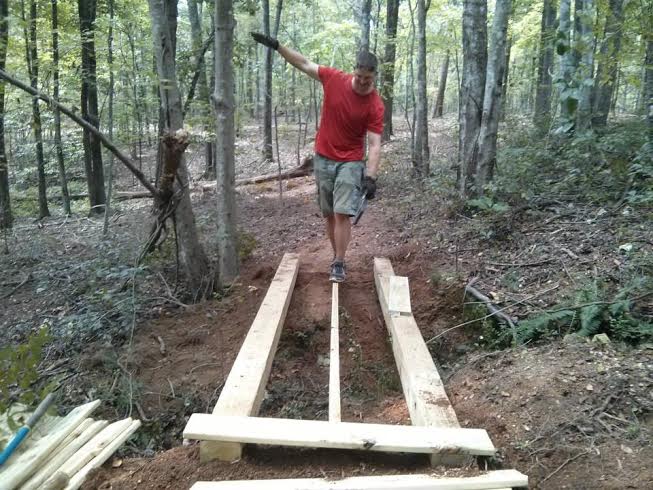 What’s next? We’ve already secured some funding and materials for the 6 miles of proposed trail outside the fence between the park and I-75 and are preparing to move forward with preliminary work during the summer or fall of 2014? It is mapped and approved and we are searching for more funding since we don’t want to hand cut 6 miles!!!!

In hindsight I would commit to this project again in a New York minute, it was a blast. I made a bunch of new friends and learned a lot about trail building plus, there wasn’t a time I was out there that I didn’t have riders and runners thanking me and the team for our efforts. When you look around and see trails at SAU, ESNP, Raccoon, 5-Points and the Cherokee National Forest you realize we are lucky to live in a community that embodies the outdoor spirit. Now, get off the couch and get in the woods!